Imagine living in a place where there are no rules, conventions or punishments of any kind. In the Westworld — a series produced and shown by HBO since 2016 — a group of people live with super advanced androids simulating human emotions; this raises the question of “who is what” within that world. Based on the 1973 film, with the same name, by the screenwriter Michael Crichton, creator of hits such as Jurassic Park (1990) and medical drama ER (1994), the complex plot full of twists and the big-name cast has captivated the public, making the series a hit for both audience and critics. What is the reason behind its success and the clues it tells about the future?

Imagine living in a place where there are no rules, conventions or punishments of any kind. In the Westworld—a series produced and shown by HBO since 2016—a group of people live with super-advanced androids simulating human emotions; this raises the question of “who is what” within that world. Based on the 1973 film, with the same name, by screenwriter, Michael Crichton, creator of hits such as Jurassic Park (1990) and medical drama ER (1994), the complex plot is full of twists and the big-name cast has captivated the public, making the series a hit for both audience and critics. What is the reason behind its success and the clues it tells about the future?

João Massarolo, filmmaker and professor of Cinema at Universidade Federal de São Carlos (UFSCar), has been following the world of audiovisual productions for almost 30 years. With a background in Psychology, the director and screenwriter of O Quintal dos Guerrilheiros (2005) believes that audience identification with the characters is one of the series’ main gains. Another important Westworld advantage is the capacity of producing more reflection about society and its projections. For instance, there are episodes in which the robots themselves question where they come from, an eternal mankind question.

“Westworld addresses contemporary issues, which speak directly to its audience, touching on important points in both private life and the workplace. The episodes depict a world built on algorithms, and this reality is mediated by databases that create emotions. It is aimed to entertain visitors as if they were at an amusement park, which is a detailed reproduction of the old American West,” explains Massarolo.

The park is inhabited by intelligent robots, created from a human behaviour database, with the sole and exclusive purpose to offer personalized experiences to visitors. Also, according to Massarolo, the fictional design of the series triggers conflict over what is real and what is fiction. “These conflicts contaminate the visitors’ experiences, turning the park into a battlefield between humans and machines,” he says.

Questions about limits and pleasure humans get seeing the suffering of others are some of the controversial themes arising in the series. Psychoanalyst and professor at the Universidade Estadual Paulista (Unesp) André Luiz Gellis explains that since the story unfolds in a world without rules, characteristics such as perversion appear even clearer. “The series deals with a kind of extraordinary journey in its ‘permissiveness’, in which ‘perversion’ spreads openly, organizing a social bond, even a form of government. The narrative even attempts to confront madness: the field of action and love, once again, is defined by the attention of the audience, unfolding in all its specificity.”

Gellis also points out that the lack of rules creates constant conflict between the parties. “It seems that the series shows how—in a horizon of constant clashes—words can no longer be trusted as capable of authenticating what madness and lack of rules demonstrate, for lack of a sufficiently reliable alterity to bear witness. That is, there is no regulatory body.”

In the United States, the first season attracted 13 million viewers. The second, which ended in June of 2018, was watched by 10 million people. At the 2018 Emmy Awards, the series had the third largest number of nominations, competing in 21 categories, including Best Drama Series. The success was an indicator for a new season production, planned to be released in 2020.

Journalist Heitor Freddo, 28, began to follow the series after another HBO hit, Game of Thrones (GoT). He points out that, early on, the plot caught his attention, thanks to its non-linear narrative. “It’s shocking right from the beginning; it’s past, present, and future altogether, which ends up capturing the audience’s attention. Then, the unfolding events continue to captivate the viewer,” he says. Júlia Hirano—28-year-old publicist and also a GoT fan—followed recommendations from friends and decided to try Westworld. “A lot of people had already told me that the show was good; the cast—including Anthony Hopkins and Brazilian Rodrigo Santoro—also caught my attention,” she says.

According to fans, the philosophical and social issues addressed are the reason of the series’ success, which may seem complicated, thanks to constant twists and turns. “The first season captures us with an idea of where the story goes; the second messes with all the certainties we had built, it really messes with your head,” says Freddo. Julia adds that putting together this ‘jigsaw’ always ends up surprising the viewer. “The plot continues to give us hints on how the series is going to proceed. You put the pieces together about who is human and who is a robot, but, in the end, most of the time, you are completely wrong about the connections you have made. This led us to think about the events and actions of the characters, even after the series ends,” adds the publicist.

Massarolo explains these achievements in the real world; he reflects on the conflict the series proposes between humans and robots. “The series discusses the boundary between an imagined world and our daily lives in the most brutal way, through confrontations between ‘real’ characters and others made with artificial intelligence. The basic rule is that video games and fiction should not affect our lives in any literal way. It is something apart, that we use to escape from our day-to-day desires and anxieties. The series questions this fine line, with the robots of the park themselves, becoming aware of the world around them, which for them is no longer a fantasy world, but a real world, so they rebel against the human hosts.” 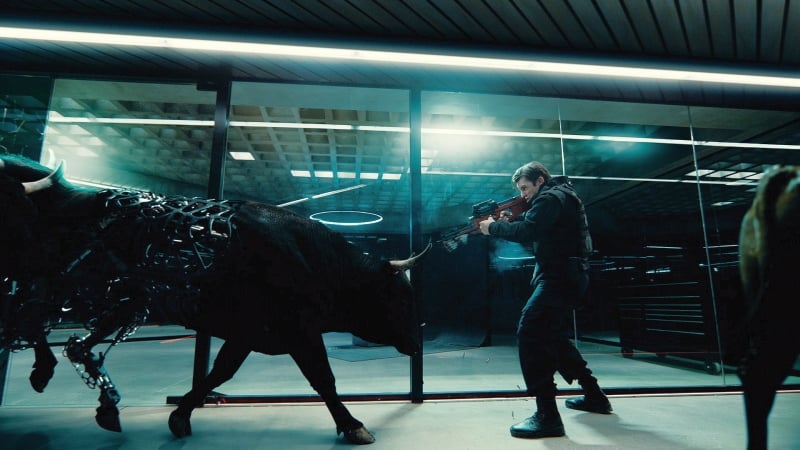 The result is that self-criticism of what the human being calls “fictional” or “artificial” elements are part of what is “real.” Massarolo also says that the issue under discussion is the porosity of the boundary between the imagined world and everyday reality, “which is not as clear as it seems”.

Contemporary themes such as privacy, gender equality, politics and entertainment, social networks, war, and humanity, are placed on the agenda by constructing fictional worlds that may sound distant but actually address issues that are part of day-to-day life.

“These stories and their characters take us to imaginary worlds; not physically, but emotionally, providing catharsis for a wide variety of feelings and experiences that we might never have in our ordinary lives,” Massarolo analyzes.

The type of confluence between the worlds we see in Westworld is also noticeable in other productions such as Black Mirror, a Netflix science fiction series created in 2011. The reality, however, indicates that the subjects discussed in the show should also be the topic of social discussions in our daily lives. In China, for example, a mobile application called Zhima Credit assigns a kind of “social credit” to the public, which varies according to the person’s attitudes.

Connected to another app, Zhima compiles a database and has access to information such as a person’s bank payments and volunteer work. All of this generates a score that has even stopped people from receiving bank loans because of their reputation.

“These series present an original perspective of the near future, through prototypes of possible worlds. The most interesting thing is that these worlds are somehow already part of our reflections and what we want to experience in our daily lives,” analyzes the filmmaker from UFSCar.

“We think and engage because it ends up reflecting on how far humans can go. We do not know who is a robot or who is a person, but this raises the question of whether behaviour that is not socially acceptable for people could be committed against a robot, which also has human characteristics. It’s an ethical issue,” Freddo adds.

These series put human beings face to face with their most perverse side, and this is one of the challenges for a future society, considering the actual scientific and technological advancements. This is what one of Westworld’s characters says: “Consciousness is not a journey upward, but inwards. It’s like a maze. Each choice puts you closer to the center or to the edges.”